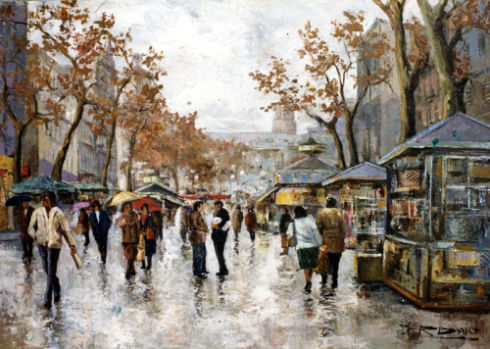 “I can calculate the motion of heavenly bodies but not the madness of people.”

Hola my dear readers. I know, it has been over a month since the last time I posted anything. I have taken a long holiday. Away from politics, away from Brexit, away from the anxiety of living in limbo. It is funny how easily you can disconnect from it all. Ignore your phone, do not read any news, and do not look at your twitter. Easy to do while you are on holiday anyway. I spent two glorious weeks in southwest Spain. It is wonderful to be back home but also increasingly confusing. My heart, my very soul is as Spanish as ever, especially now that I am teaching the love for my country to both my children but I haven’t lived there for 13 years and I do feel sometimes like a stranger in my own city. Faces are still familiar but quickly fading away from memories, I’m barely up to date with its TV shows, new bands, even films. However, you ask me anything about any aspects on the British day to day and I answer you straight away. I could name the majority of Ms May’s cabinet but I just about able to name a few of Mr Rajoy’s one. I sadly realise that a quick read every day of El Pais (my favourite Spanish paper) and my ritual breakfast with the Spanish news in the background doesn’t cut it anymore. I am slowly losing touch with my homeland and getting more attached to this one, the one now I call home. A home from home.

I suppose it is easy to understand why the majority of the EU citizens living in the UK feel betrayed and angry. I know people who have lived here longer than I have and the thought of returning to their own country scares them for the same reason it scares me. It has been too long and it will take a lot of readjustments and a lot of missing the bits and bobs that shape your life here. It is the 1st of September and still, after the 3rd round of negotiations with the EU nothing has been agreed in relation to our rights. I am not a scaremonger, but for just one second imagine yourselves receiving one of the 100 letters sent by mistake by the Home Office telling you are going to be deported. A mistake. Another mistake from the Home Office. Nobody is perfect, fair enough but in the back of my head a little voice keeps asking why those letters where written in the first place and why they were targeting EU citizens.  Is there a letter already written for me? Waiting to be sent, I hope not.

Anyway, let’s not dwell on mysterious human mistakes and hope that those files are permanently deleted from the Home Office hard drives. I cannot leave you today without paying my respects and sending tons of love for the victims in the horrific Barcelona attacks. The painting I’ve chosen today is of the wonderful sight of Las Ramblas. I was on the beach that evening, a thousand kilometres away. It does not matter how many times these atrocities have happened before. The images of a vehicle being driving by a human over the pavement, with the sole porpose to kill as many as possible are enough to stop your heart from beating. In the name of a religion they do not represent. As with the attacks in London or Manchester we cannot stop wondering that it could be one of us in the next one. That is a thought that will haunt us for life but we will live that life with no fear nevertheless, it is the least we can do in honour of those who cannot do the same anymore. “Even the darkest night will end and the sun will rise.” wrote Victor Hugo in Les Misérables. I for one will be waiting at dawn. See you again soon. Besos.