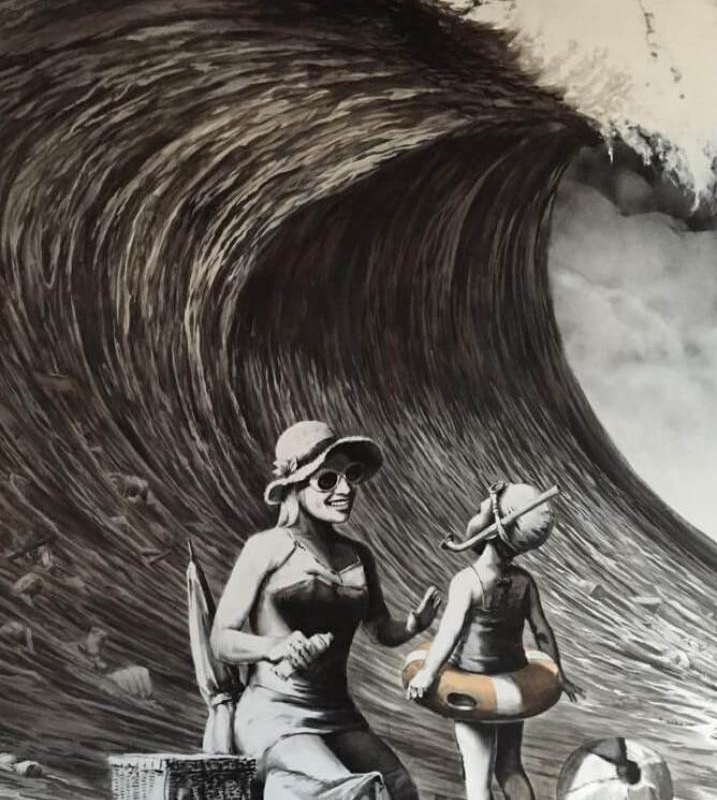 “Art is the lie that enables us to realise the truth.”

A little bit brighter in Dismaland but not enough Sol

I am sure you all have seen the new Banksy mural in Dover. A worker, chisel in one hand, chipping away one of the stars of a massive EU flag. I love it. It is simple, extremely effective and provocative. Of course, as with any other piece of art it has already created a lot of controversy on social media. Some say it is a little bit too late to have an opinion about Brexit, others say it is boring and patronising. I say thank you. For me it is a reminder of what the stars in the flag stand for “the ideals of unity, solidarity and harmony among the peoples of Europe”reads the EU website but I also find the location more relevant as it is close to the ferry terminal that connects us with mainland Europe. In a region where Brexit won by a large margin. Timing for me it is perfect too. We are in the middle of the General Election campaign and at the beginning of the Brexit talks which have already turned frosty and contaminated. That’s why Banksy has become the ultimate 21st century artist and not just famous for his graffiti. He has a special gift to reflect on our times with a pinch of humour, lots of irony and a guerrilla conscience. Plus for some it does look good too.

Anyway, I started off with Banksy because yes Le Penn did not win! A massive relieve. After Trump and Brexit you kind of believe anything is possible even if the thought of a France ruled by her was frankly too scary to handle. Macron is the winner and a massive sigh of relief was heard across the EU. So far the ultras have not won either in The Netherlands or France, and recent polls show that they are not a real threat in the next German elections. It is definitely a warm spring in Europe and you sense reading the press this morning that there is a new wave of optimism about the Union with only Italy as a dark cloud hanging over their heads. I must admit I do feel as a pro European slightly more cheerful now then I did after Brexit, but it does not mean that EU can rest on their laurels. Massive changes need to done in order to bring the institution closer to their citizens and above all to make the structure work for all economies. Let’s hope this does not become just a German-French affair. Wouldn’t of been nice to have you still in?

Back to UK matters, well I voted (maybe for the last time?) in last Thursdays elections. I have tried not to focus this blog too much on the EU migrant rights situation. You get used to living in a limbo, but going to vote was a painful reminder that everything I enjoy as an EU citizen is about to change. I did try to joke about it at the electoral table but I only managed to bring sadness to people faces. It is extremely touching the sympathy and support I get in Bristol, a city that voted remain. What a pity that the political elites are not that understanding. Ms May this morning sounded so adamant to fulfil her promise of cutting immigration down to under 100,000 yet only willing to reach an agreement on the situation on the 3 million of us EU immigrants. Her cuts are just not possible. The government has missed their immigration target for the last 6 years. It will get easier to control numbers once the UK is out of the EU, but on the other hand, ministers have been also busy reassuring businesses that they will be able to get the people they need from the EU. If the economy needs them, they will be allowed to come. So in a nutshell, you try to please everyone but the reality is you will end up pleasing no one.

Two things before I leave. Firstly I strongly recommend to read an article published on Sunday in the Guardian www.theguardian.com/technology/2017/may/07/the-great-british-brexit-robbery-hijacked-democracy seriously disturbing and worrying.  Secondly, I’d like to pay my tributes to the late Lord Thomas of Swynnerton, the historian Hugh Thomas who died last Saturday at the age of 85. His 1961 The Spanish Civil war is a classic reference for anyone trying to tackle those horrible years in Spanish History and it was even banned by the Franco regime. A great historian and very much loved and respected Hispanist. Also a remainer. RIP.